Colombia, Panama, and Paris – Crossroads of World Cultures & Reflections on the Psychology of Happiness and Travel 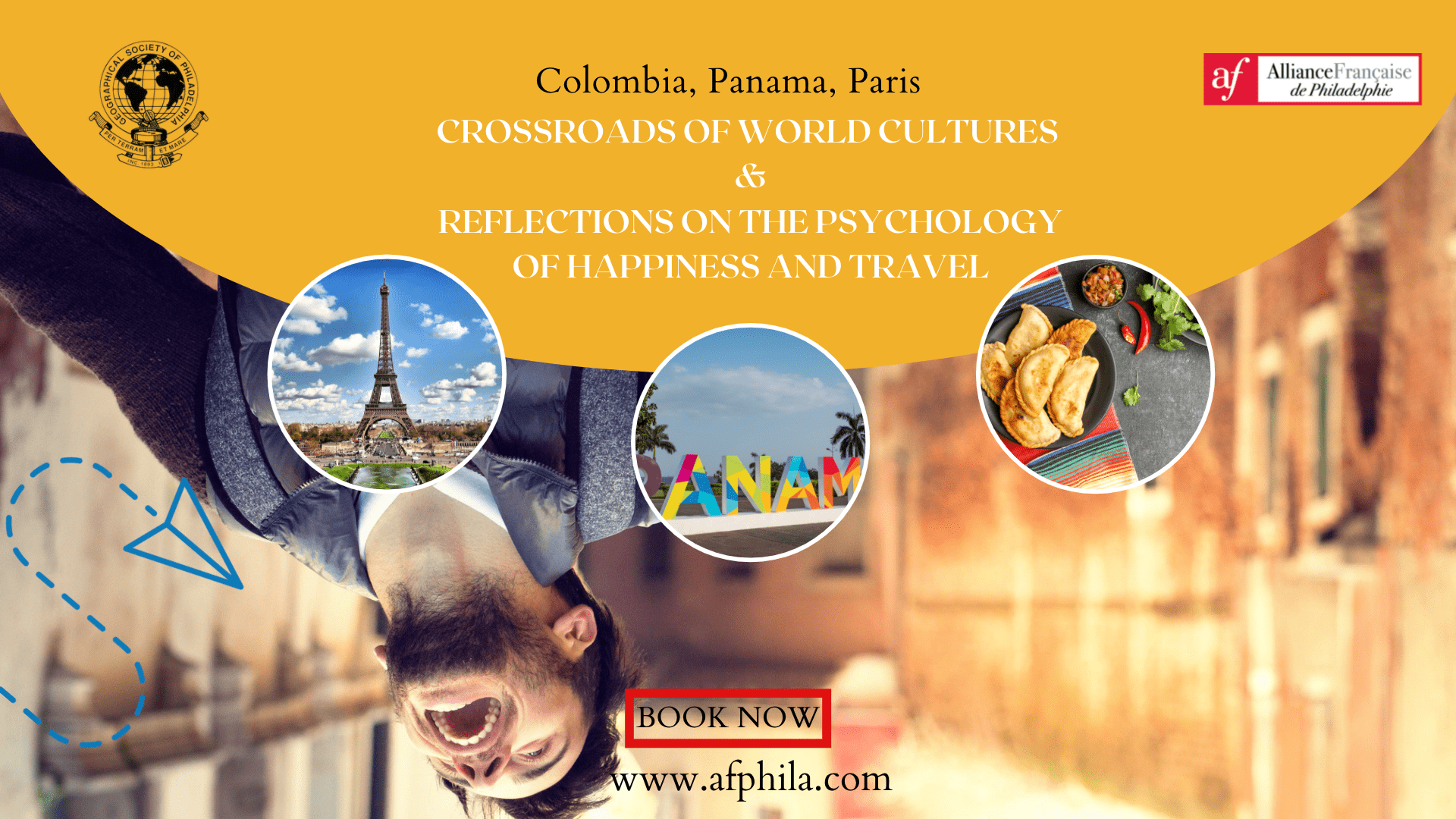 To purchase the tickets, please click on the button below:

Join the Alliance Française and  Geographical Society of Philadelphia’s friends at the historical neighborhood opera house and generous host the Academy of Vocal Arts.

Marco Polo travelogue series is Back on the Road presenting Crossroads of World Cultures; Colombia, Panama, and Paris.

Also, presented by a clinical psychologist, join us to hear about Reflections on the Psychology of Happiness and Travel.

Enjoy samples of the cuisine from the countries of focus, catered by the Chef’s Table, and a complimentary glass of wine.
Discount drinks available courtesy of New Liberty Distillery.

Drawing from themes in positive psychology, resilience, and mindfulness, and from their recent trip to Paris, Susan Stuber, a clinical psychologist and her husband Jim will share their reflections on how to manage emotions and expectations, right-size disappointments, and have the fun we all hope to have on our travels, wherever they may be .


The Honorable Georgia Athanasopulos – Consul Athanasopulos was born in Panama City, Panama, to Greek immigrant parents.She began her diplomatic career in 1985 as the Vice-Consul General of Panama in Athens, Greece. She was later appointed as the Consul General of Panama in Philadelphia in 1996. Her jurisdiction includes eleven states within the United States. While serving as Consul General, she has created an open dialogue between Panama and the Regions she represents in areas such as education, health, business, and trade. She has worked diligently with several nonprofit, educational, and religious organizations to build programs such as schools in remote and underprivileged areas in Panama. She has been a key factor in various fundraisers to benefit the Children’s Hospital of Panama, and, to date, a Memorandum of Understanding has been signed with the biggest private Greek-owned hospital group in Panama. A member of Saint Thomas Greek Orthodox church, she has been very active not only in this congregation but with all other Greek Orthodox churches in her region. In 2004, she was instrumental in the opening of St. Nicholas Greek Orthodox Church in Havana, Cuba.

Due to the importance of the Panama Canal to World Trade, Consul Athanasopulos has organized numerous missions to Panama, strengthening commercial ties between the various Free Zones, the Delaware Valley, and Greece. She is the Dean of the Consular Corps and received several awards during her career from different organizations and officials for her various services to Panama and Greece.

Margaret Lonzetta – “The pandemic has changed travel for all of us so it is particularly nice to have the Geographical Society programs that allow us to share our experiences. In 2019 I enjoyed a lovely trip to Colombia and am pleased to share some memories with you. When I was seven years old, one of my uncles took a “grand tour” of Europe and sent me postcards from most of his stops. I was hooked! I knew traveling was in my future. My very first trips were to Canada and to key places in Western Europe (probably like so many of the rest of us!) Then, it was my long career at the World Affairs Council of Philadelphia that really “unlocked” the wider world for me. I was privileged to visit China in 1979, sparking a lifelong love of Asia, where I led four additional trips to China and 12 study tours to Japan. Through the years I have visited almost all of Western Europe, East and Southeast Asia (except Brunei!), Turkey, Egypt, Morocco, and much of Latin America – a number of countries more than once. After retirement from the World Affairs Council, I had the privilege of serving on the board and as president of the Geographical Society.”

Susan Stuber, Ph.D., and Jim Stuber, J.D. – Susan is a clinical psychologist in private practice in King of Prussia, PA, and Jim is an international attorney, author, and entrepreneur. Together they fine-tune their resiliency and flexibility skills daily as they raise their four children aged 16-21!

“We spend significant time and effort planning our vacations. We poll our friends and compare notes, and spend good money in anticipation of having a fantastic trip. We look forward to getting away from the familiar routines and the daily grind and face our departure with mounting excitement. Often there’s an ebullient high at the start of the trip.

But how long before we habituate to being in our new environment and start to get aggravated by a long line, a bad meal, or an unanticipated turn of events? Happiness is not generally experienced at a steady rate over time, yet we have such high expectations for our time away that finding ourselves unhappy can be that much more disappointing.”

*** ABOUT THE GEOGRAPHICAL SOCIETY OF PHILADELPHIA ***

The mission of the Geographical Society of Philadelphia is to promote the discovery and appreciation of the many wonders of our world. The Society supports world exploration by presenting enlightening programs on travel, geography, science, history, exploration and world cultures to its members and the public in the Philadelphia area.

Create your membership and join the AF members community!

Sorry, you've missed the RSVP deadline for this event.